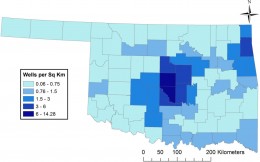 Estimating Private Domestic Well Use in the United States: A Pilot Study in Oklahoma

Private domestic wells are not subject to the testing requirements of the Safe Drinking Water Act and are susceptible to contamination by natural and anthropogenic contaminants. For public health and planning purposes, the locations of high density of private domestic well (PDW) use need to be determined. A key resource is the 1990 U.S. Census where the source of water was a survey question, which led to a nationwide estimate of PDW usage. In this paper, methods are developed to estimate the areal density of PDW use in later years using readily accessible data including the 1990 census results. Because of abundant data on PDW locations and public water supplies, Oklahoma was used for a pilot project. Well logs reported to the Oklahoma Water Resources Board and the addition of housing units provide the means to update the 1990 census estimates. Census results and housing unit data are available on the county, census tract, and census block group level. PWD density estimates were consistent among these scales, as were estimates based on wells added and net housing units. The completeness of reported well logs was tested by counts from neighborhoods with known reliance on PDWs. The results showed that a significant undercounting of logs exists, and the small scale of subdivisions relative to even census block groups causes the method estimates to be lower than subdivision PDW densities. The estimates, however, indicate locations where high densities of PDWs are expected.