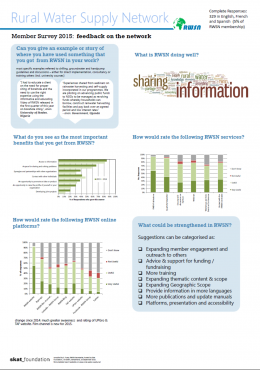 In an on-going effort to improve the quality of the service provided by the Rural Water Supply Network and the Secretariat, an online survey was launched in July and kept open for four weeks. The survey was publicised through Dgroups, LinkedIn, Twitter, Facebook and via RWSN steering committee member organisations. over 600 complete and partial responses were logged by the SurveyMonkey software, which is roughly 10% of membership (though non-members also responded), however the actual number completing all the questions in the survey was 329 - similar to 2014

This document summarises the responses and aggregates the answers from the three languages offered: English, French and Spanish.

The Secretariat would like to thank everyone who took the time to participate in this survey.