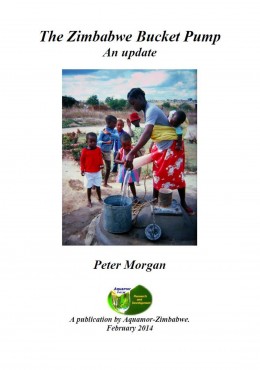 The Zimbabwe Bucket Pump An update

The “Bucket Pump” is a water lifting device which uses a tubular bucket to raise water from a tubular well – known as a tube well. These wells, usually drilled with a hand auger. They work best in shallow aquifers, where the soil is soft and easy to penetrate. Where conditions are suitable a well can be hand drilled in a few hours, cased with a PVC pipe, which is surrounded by a gravel pack. The pipe ascends through a concrete head-works consisting of an apron and water run-off. The pipe is closed off at the top lid. The tubular buckets were fitted with a non-return valve at the base. At first the tube-buckets were raised on a rope directly by hand. Later models used a windlass system to raise the bucket. Initially these windlass adapted bucket pumps were hand made using treated gum poles as windlass supports. Later the concept was commercialised, which shadowed the earlier work and made the device more expensive.