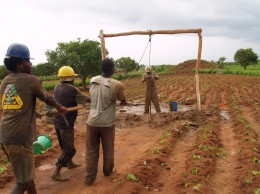 This summary is part of a series that describe the experiences of manual drilling in several countries.
It is estimated that up to 1,000 manually drilled wells exist in Malawi. Documentation on what was undertaken in the past is scant. However an initiative by Mzuzu University Centre of Excellence in Water and Sanitation SMART Centre in Northern Malawi commenced in 2012, with 50 manually drilled wells constructed by mid-2013. Businesses are being trained in both technical and business aspects of manual drilling. The national water policy does not specifically refer to manual drilling, but the 2012 Sector Performance Report recommends the technology as well as self supply approaches.