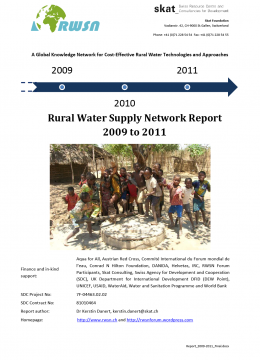 In the period from 2009 to 2011, the RWSN has continued to develop as a network, by both responding to developments in the sector and trying to foster change and catalyse improvements. The past three years witnessed changes in human resources, the structure of the network and its thematic focus areas. Kerstin Danert took over from Erich Baumann the coordination of the RWSN secretariat (hosted by Skat Foundation), and was joined by Sean Furey. The full Steering Committee invoked an Executive Steering Committee to streamline strategic development and oversight and the RWSN chair was handed from Clarissa Brocklehurst (UNICEF) to Richard Carter (WaterAid). Self Supply coordination was handed over from Sally Sutton (SWL Consultants) to André Olschewski (Skat Foundation).