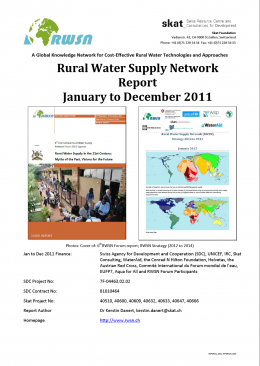 2011 witnessed the joint development of the new strategy for RWSN (2012 to 2014) with workshops, meetings, telephone and email discussions between the RWSN partner organsiations and others. The new strategy, launched in January 2012, emphasises: (i) much more emphasis on the member networking aspects of RWSN including drawing out member experiences and good practices; (ii) expansion of the Cost-Effective Boreholes theme to include a much greater emphasis on groundwater resources; (iii) contraction of the sustainability theme to the management and support of rural supplies and (iv) addition of a new theme on equity and inclusion and (iv) the decision to become a bilingual (French/English) network within the strategy duration.