Note: JMP data for Sudan includes South Sudan up to 2011, after which it became independent (July 2011). 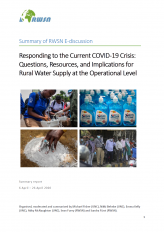 From 6 to 26 April 2020, RWSN and the Water Institute of the University of North Carolina at Chapel Hill ran this e-discussion organised and moderated by Michael Fisher (UNC), Nikki Behnke (UNC), Sean Furey (RWSN) and Sandra Fürst (RWSN). The present document summarizes the contributions by 42 participants received during this e-discussion. Weekly summaries were prepared by Michael Fisher (UNC), Emma Kelly (UNC), and Abby McNaughton (UNC), and form the basis of this overall summary. | » 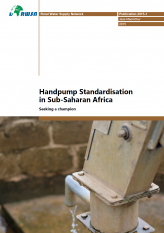 The following form the considered conclusions of Rowan Matthews-Frederick after managing a program with Medair, North Sudan in West Darfur which was responsible for installation and maintenance of more than 170 India Mark II hand pumps. Further to this, work has continued in constructing, testing and computer modelling some solutions to hand pump issues with Nile Centre for Alternative Technology (NileCAT). There are many other ideas yet to be pursued that have potential to increase the reliability and ease of maintenance of the hand pumps.
Although the following observations tend to focus on the engineering related issues it is not intended to take away from the importance of the ‘softer’ issues. Please forgive the predominance of using the first person and the occasional ‘royal we’. This is not intended to be a thorough going engineering report. It is born of a diverse experience and desire to provide the basic necessities to the world’s most disadvantaged people. | » 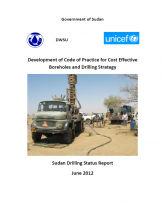 The Government of Sudan has developed National and State Water, Sanitation and Hygiene Strategic Plans for 2012 to 2016. Under the plans it is envisaged that several thousands of boreholes will need to be drilled annually to meet the water supply targets. The Government with UNICEF support developed 10 Principles for Cost Effective Boreholes which were adopted by stakeholders at a workshop in Khartoum in 2009 as the framework for future borehole provision in the country.
This is the report of a study to evaluate the status of drilling and drilling practices within the framework of the 10 principles and from it develop a National Code of Practice for Borehole Construction and a National Drilling Strategy for Sudan. Information were collected from the public and private sectors and the NGOs in 8 states.

DISCLAIMER: This is a non-RWSN publication and endorsement by RWSN or any of its member organisations should not be inferred. | » 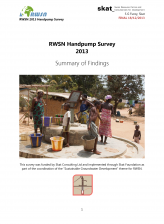 Manual pumps have been used for centuries but this simple technology remains the mainstay of rural water supplies in many countries. The Handpump Technology Network (which later became RWSN) was set up in 1992 to promote collaboration and standardisation so that handpumps could provide more reliable and better quality rural water services.

This survey is aimed at practitioners in government, NGOs, private sector and development partners who are directly involved in rural water service implementation, or who are involved in the procurement of handpumps or spare parts (as either a buyer or seller). | »