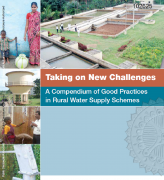 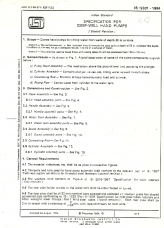 This is for historic interest and research only. Please refer to current standards from RWSN/Skat and the Bureau of Indian Standards) | » 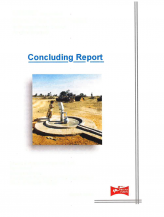 The search for alternative components for India Mark II hand pumps started with the need to find non-corrodible below-ground assemblies for hand pumps installed in aggressive water conditions. Published data during 1985-92, on the performance of uPVC riser pipes in deep well hand pump applications in Sri Lanka and in shallow water table conditions in coastal Orissa provide some understanding of the behaviour of uPVC when used as riser pipes'. These and other experiences of that period recorded notch failure in threaded couplers and riser pipe ends; abrasion of external pipe surfaces against borewell walls, internal wear against connecting rod couplings and slippage of glued bell joints.

Meera & Ceiko Pumps Ltd., Hyderabad (M&C) offered to execute this work and it was accepted by UNICEF. Work started on the UNICEF Hand Pump R&D Project in Ranga Reddy District of Andhra Pradesh in September 1999. The project was extended once and came to a conclusion at the end of November 2000. | » 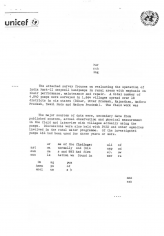 The survey focuses on evaluating the operation of India Mark II deepwell handpumps in rural areas with emphasis on their performance, maintenance and repair. A total number of 4,840 pump were surveyed in 1,864 village spread over 18 districts in six states (Bihar, Uttar Pradesh, Rajasthan, Andhra Pradesh, Tamil Nadu and Madhya Pradesh). The fieldwork was carried out between July and December 1985. 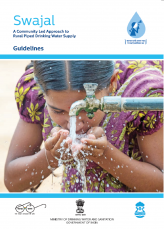 The Guidelines on Swajal provide details of the scheme, implementation arrangements, financing provisions and roles and responsibilities of various stakeholders involved in its implementation.

Also below are related Government of India guidelines on rural water programme design,

They are shared here as an examples of national government guidance | »