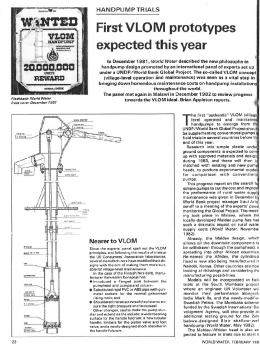 In December 1981, World Water described the new philosophy in handpump design promoted by an international panel of experts set up under a UNDP/World Bank Global Project. The so-called VLOW concept (village-level operation and maintenance) was seen as a vital step in bringing down the horrendous maintenance costs on handpump installations throughout the world. The panel met again in Malawi in December 1982 to review progress towards the VLOM idea.