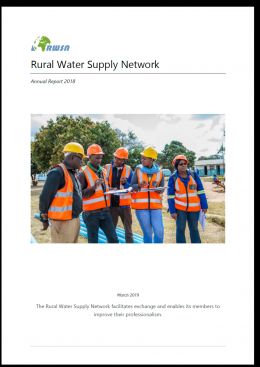 The focus for the Rural Water Supply Network (RWSN) in 2018 was the approval, by the RWSN Executive Steering Committee, and subsequent launch of the new RWSN Strategy (2018-2023); renewal of the co-funding agreement with SDC, and the development of the RWSN Young Professional Engagement strategy. The RWSN Executive Steering Committee also started a review of RWSN’s governance arrangements as recommended by the 2017 external evaluation of the network.
Membership of the network continued to grow - from 10,082 to 10,883 between January and December 2018, an increase of 8%.
RWSN also organised a number of thematic knowledge-sharing and networking activities, including an online course, webinars and e-discussions, and participated in face-to-face knowledge-sharing and networking events. Almost 1700 members participated in the RWSN webinar series, which included 29 weekly dedicated sessions in four languages. Recordings and related documents are available for viewing and sharing on the RWSN website and on video platforms.