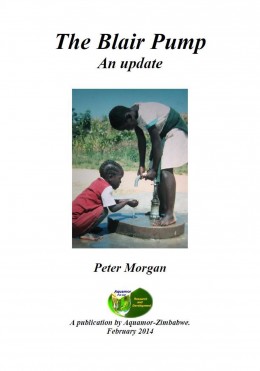 The Blair Pump An update

The Blair Pump is a simple direct action shallow well hand pump. It was first designed in 1976 and developed further at the Blair Research Laboratory in Harare, (formerly Salisbury). The earlier models were heavy duty using 90mm PVC pipe as a cylinder. The maximum lift of these earlier models was 6m. Later in the early 1980’s a lighter duty model was designed at the laboratory for family use. Like the earlier model it was built with “off the shelf” fittings, which could put together by an artisan or in the home. This later model used 40mm PVC as a cylinder. The maximum pipe length for these later models was 12m. A description of its construction was introduced in to the school curriculum at the time. A mass produced version was also manufactured in Zimbabwe in the early 1980’s, using 50mm PVC pipe as a cylinder. These various models were described in detail in Rural Water Supplies and Sanitation.