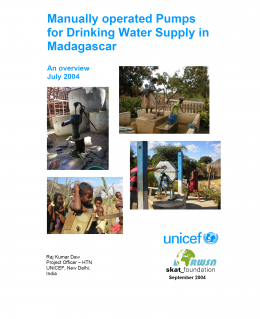 UNICEF Madagascar has been supporting rural water supply and sanitation activities in Madagascar for over ten years. The Water, Environment and Sanitation (WES) desk of UNICEF works with Ministry of Energy and Mines (MEM), Government of Madagascar, on a number of water supply initiatives. One of these projects, in the southern part of Tulear Province (also known as the South – Sud), comprised of drilling wells and installation of 150 India Mark II handpumps in the vicinity of Antanimora. This is referred to as the AAEPA Project later in this report. The installation of handpumps in the AAEPA Project was completed during 1994-96 and has since then been supported by UNICEF for its operation and maintenance (O&M)
with supply of spare parts. Over the years, this project has undergone reorganisation a number of times.
The AAEPA Project was evaluated by the World Bank in early 2004. The evaluation noted that the spare parts distribution was not well organized and was subsidised. It was also noted that the India Mark II handpumps lacked a country level distribution network.