From Tractors to the Tara pump 30 Years of HTN/RWSN 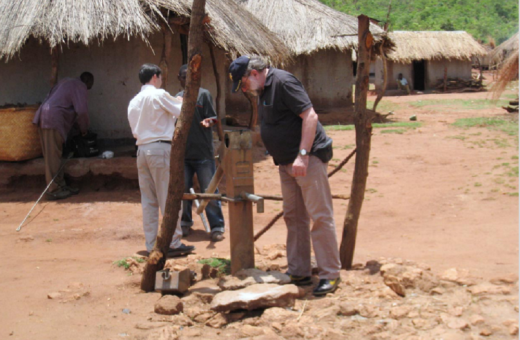 This year we are celebrating 30 years since the Rural Water Supply Network was formally founded. From very technical beginnings as a group of (mostly male) experts – the Handpump Technology Network- we have evolved to be a diverse and vibrant network of over 13,000 people and 100 organisations working on a wide range of topics. Along the way, we have earned a reputation for impartiality, and become a global convener in the rural water sector.

RWSN would not be what it is today without the contributions and tireless efforts of many our members, organisations and people. As part of RWSN’s 30th anniversary celebration, we are running a blog series on rwsn.blog, inviting our friends and experts in the sector to share their thoughts and experiences in the rural water sector.

This is a guest blog by RWSN co-founder Erich Baumann, based in Ireland.

I grew up in Switzerland after graduating as a mechanical engineer, and started working in the agricultural sector, designing tractors with reasonable success. Back then, (in the late seventies) the Swiss tractor industry was suffering badly and many factories, including mine, had to close. My marriage fell apart too. I therefore had to look around for another solution. When Caritas looked for an engineer to help them with the development of local tractor manufacturing in Bangladesh, we both found that this could be a match made in heaven.

In 1979, I moved to Bangladesh and started working in the Mirpur Agricultural Workshop and Training School (MAWTS). It was there that the Mennonite Agricultural project (MCC) asked me for help, not with tractors, but with the Rower pump: a simple direct-action pump for small-scale irrigation that had been field tested in Comilla. We worked together with Dan Spare on improving the manufacturing processes and using only local materials; eventually we managed to ensure maintenance was possible without using any tools. The MCC ordered 1,000 pumps; this helped the MAWTS to launch a manufacturing process at large scale. Luckily the MAWTS had a small group of professionals that helped me in identifying small factories that used indigenous technologies.

At the same time another NGO, Rangpur Dinajpur Rural Service (RDRS), was implementing a small-scale irrigation project in the north of the country, using treadle pumps. They had a large market for these pumps but not enough manufacturing capacity. This was a great opportunity for some of our trainees, who could set up small rural workshops with relatively little help. So, within a short time, Bangladesh established a manufacturing capacity of about five thousand pumps annually.

There was a lot going on at the time with regard to irrigation pumps, but the drinking water pumps were not that prominently on the agenda. The World Bank-UNDP Water and Sanitation Programme and UNICEF were keen to get some development started as the No. 6 pumps were not very reliable. They approached MAWTS to see whether the training school would be interested. After several meetings between Ken Gibbs (UNICEF), Tim Journey (World Bank), Md Ikramullah and myself (MAWTS), we agreed that we would, based on the Rower pump technology, work on a direct-action drinking water pump. Many components of the Rower pump could be used for drinking water but some others (for instance the filters) would need to be invented.

Within a few days we had a working prototype which we thought seemed promising, and UNICEF placed an order for 110 pumps with MAWTS. In the good old days, procurement was not fully regulated; thus the 110 pumps were manufactured and delivered before the purchase order even reached MAWTS. Field testing showed some good results, and we started working on the development of an all-plastic filter. Tim [Journey] found an article about a Robo-screen, tried in Australia. We replicated the design and started producing this screen. Caritas Switzerland sent us a sizeable number of 0.25mm wide milling cutters, which we needed to finalise the production process.

Once the testing pumps design was successful, it was transferred to India where the Indian Bureau of Standards took it up; the Tara pump was then turned into a national standard.

After 3 years in Bangladesh, in 1984, I decided to turn down an offer to join the World Bank-UNDP Water and Sanitation Programme and returned to Switzerland to join SKAT. The Swiss Agency for Development and Cooperation (SDC) agreed that the World Bank could pay for the services that SKAT would offer. A very fruitful cooperation started and my career as a handpump specialist began.

The Birth of the Handpump Technology Network, and the Rural Water Supply Network

By 1992, handpump technology had made its way into rural water supply. Many local governments started to accept the point sources with handpumps for drinking water. The policy promotion by UNICEF and the World Bank made handpump supplies viable. With this change in the environment, it became interesting to enter the market; competition was fierce between pump manufacturers. To get some stability into the sector, the UNDP-World Bank project decided a handpump workshop would be helpful. The venue for this workshop was Kakamega Golf Club in western Kenya. About 50 experts came together to discuss the technology aspect of handpumps.

The meeting point was ideal as Kakamega did not offer many distractions. Even going out for a meal was a bit of an adventure. You had to bring a very strong fork to be able to penetrate the chicken.

Kakamega was a small town with several thousand handpumps. There was a Finish project that had used India MKII pumps initially and had just recently decided to change to Afridevs. It was a new a concept that you could take the piston out without lifting the cylinder and there was still quite a bit scepticism about the open top arrangement.

As usual in a competitive environment, people felt very strongly about who had the best hamdpump design. The two pumps in the public domain, the India KMII (cheap but sturdy) and the Afridev (with more unusual design aspects) were also fighting for acceptance. The arguments were often dominated by arguments such as “not designed by me”. I too had some strong views on designs and we were discussing design details for hours. The arguments often run up to the early hours; since the Golf club did not have a bar there was also no option of a final conciliatory drink.

There were some wise men in the group who concluded we were wasting a lot of energy without coming to a useful result. Peter Wurzel and Rupert Talbot suggested that the arguments would go on for ever and it would be best to form a design group: the Handpump design working group. Peter Wurzel should be the chairperson of the group, with Scott Devereux from Consumer Research in England, Leif Hommelgaard from UNDP-WB and me as permanent members.

And that’s how the Handpump Technology Network was formed without defined Terms of Reference or constitution. We concentrated on a few aspects, namely standardisation and handpump specifications. Rupert, Leif and Peter kept a good eye on me and helped me to find some support from the Swiss Agency for Development and Cooperation. Handpump specifications were generally accepted as key documents for public domain pumps. Piers Cross of the World Bank suggested in 2006 that the Handpump Technology Network should broaden its remit from handpumps only to rural water supply more generally; and this is how the Rural Water Supply Network was born.

About the author: Erich Baumann is an internationally recognized technical expert in the field of rural water supply with 30 years of experience. He headed the secretariat of RWSN (formerly the Handpump Technology Network HTN) from 1992 to 2008. He was instrumental in establishing the network in supply chains, low cost drilling, self-supply household solutions, handpump research and development, capacity building in local production, technology transfer, quality control and quality assurance, and training. He authored many publications on handpumps and rural water supply which can be found here.

Did you enjoy this blog? Would you like to share your perspective on the rural water sector or your story as a rural water professional? We are inviting all RWSN Members to contribute to this 30th anniversary blog series. The best blogs will be selected for publication. Please see the blog guidelines here and contact us (ruralwater[at]skat.ch) for more information. You are also welcome to support RWSN’s work through our online donation facility. Thank you for your support.