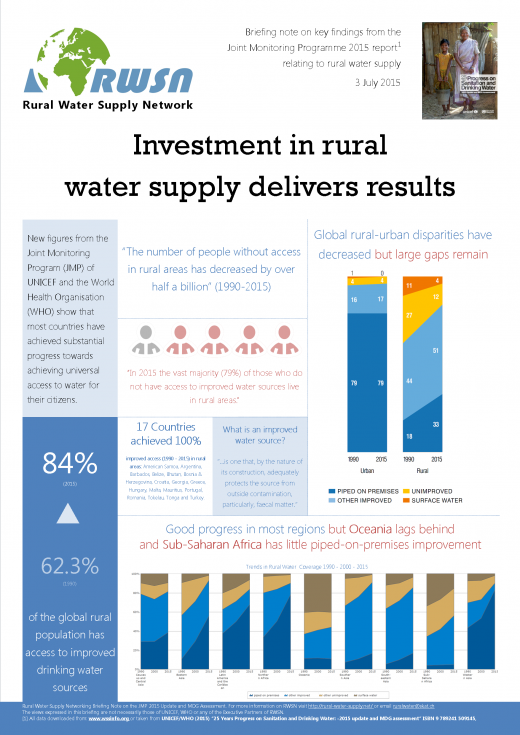 New figures from the Joint Monitoring Program (JMP) of UNICEF and the World Health Organisation (WHO) show that most countries have achieved substantial progress towards achieving universal access to water for their citizens.

THE GOOD NEWS
In relative terms, Paraguay achieved the most remarkable gains for its rural population by increasing access from 22.7% to 94.9% between 1990 - 2015.
“Despite slow regional progress in sub-Saharan Africa, Botswana, Egypt, and Senegal all increased coverage by a third.”
The absolute numbers of rural people reached between 1990 and 2015, the top countries are:

Congratulations to all the water users, implementers, funders, political and policy leaders whose hard work over 25 has achieved so much.

MANY CHALLENGES AHEAD
The rural figures for Angola are striking with a drop from 43.5% to 28.2% of the rural population having access to improved water between 1990 and 2015. However, in absolute numbers 250,000 more people have access in 2015 than in 1990, thus indicating that the provision of new services was not able to keep up with population growth. Other countries face similar demographic challenges.
Even where there have been major gains, such as Nigeria and Ethiopia, the job is only half done to achieve universal access.
The figure, right, shows that some countries, such as Egypt and Thailand have got water to people, regardless of their wealth. Meanwhile in Madagascar and Yemen we see huge disparities between rich and poor.