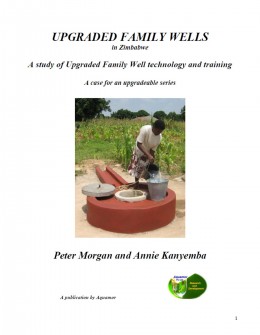 Several years ago Zimbabwe embarked on a program of upgrading family owned wells. This program was fully endorsed by the GOZ and operated under the MOHCW. The program has been well documented in papers and other publications. This program was based on the fact that for many decades individual families had chosen to upgrade their own wells privately and outside the formal GOZ rural water supply and sanitation program. In the early 1980’s the number of family owned wells in Zimbabwe was estimated to be at least 100 000. Many of these were lined with bricks and had some form of head works. Many were fitted with windlasses – a legacy from the mining industry. The windlass made the bucket easier to lift and also retained the rope or chain in a hygienic position above ground. However the majority of family owned wells were poorly protected and open and were subject to contamination, especially during the rainy season and were also dangerous for children.