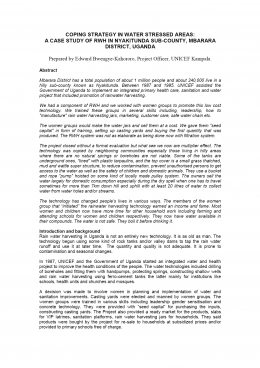 Mbarara District has a total population of about 1 million people and about 240,000 live in a hilly sub-county known as Nyakitunda. Between 1987 and 1995. UNICEF assisted the Government of Uganda to implement an integrated primary health care, sanitation and water project that included promotion of rainwater harvesting.

The technology has changed people’s lives in various ways. The members of the women group that “initiated” the rainwater harvesting technology earned an income and fame. Most women and children now have more time for other household work including farming and attending schools for women and children respectively. They now have water available in their compounds. The water is not safe. They boil it before drinking it.