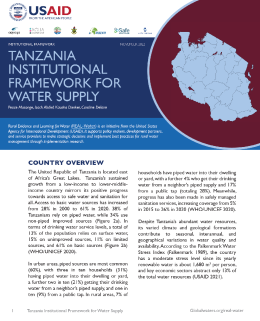 The United Republic of Tanzania is located east of Africa’s Great Lakes. Tanzania’s sustained growth from a low-income to lower-middle income country mirrors its positive progress towards access to safe water and sanitation for all. Access to basic water sources has increased from 28 percent in 2000 to 61 percent in 2020. 38 percent of Tanzanians rely on piped water, while 34 percent use non-piped improved sources. In terms of drinking water service levels, a total of 13 percent of the population relies on surface water, 15 percent on unimproved sources, 11 percent on limited sources, and 61 percent on basic sources.

Despite Tanzania’s abundant water resources, its varied climate and geological formations contribute to seasonal, interannual, and geographical variations in water quality and availability. According to the Falkenmark Water Stress Index (Falkenmark 1989), the country has a moderate stress level since its yearly renewable water is about 1,680 m3 per person, and key economic sectors abstract only 13 percent of the total water resources (USAID 2021).

This document is produced by USAID’s REAL-Water activity.