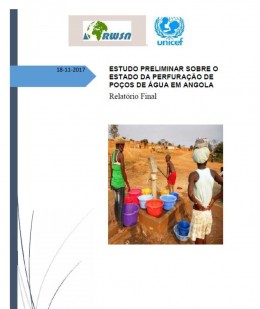 This Preliminary Assessment consists of documenting and clearly visualizing the state of water well drilling in Angola, with clear recommendations on how to strengthen the sector to ensure that effective drilling is performed. “The effectiveness of drilling, in terms of costs, is defined as the optimum value taking into account the money invested in the long term. The holes are made to last between 20 to 50 years. Therefore, the lowest cost well is not always the most cost-effective, especially if the quality of the construction is compromised to save money”. Apparently, in Angola, the term "cost-effectiveness" has been used in a counter-productive way to highlight short-term cost reductions to the detriment of quality.

MORE INFORMATION ON OTHER WEBSITES